A Year in Review for a slightly OCDisney Nerd...

Okay, so I'm a Disney Nerd.  As a kid our family would go to the parks usually once a year.  There were a lot of good memories there.  Every night we would end at Carnation Plaza where we would see the some of the greats, like the Glenn Miller Orchestra play till the end of the night.  My dad taught all my sisters to swing dance to the sounds of the big bands that would inspire me to later pick up the saxaphone.

I was completely enthralled by the immersive environments, the attention to detail, and year after year I would collect the maps and study them profusely.  I would realize much later how much I learned about the essentials of story from experiencing the parks.  there was a logic, or what I would later come to understand as an "act structure" that would frame the experiences.  The experiential quality of the attractions would set the bar for me as a story teller, and establish why I prefer live theatre over other mediums.  Because immersion to me became that final element that made any story heightened.  the moment when the story could reach out and grab you, or swallow you whole.

So when I was in college, I found myself as an actor often driving back and forth between LA and SD, and rather than sit in traffic I discovered it was far more efficient to wait out traffic in line for a ride or two.  sometimes I'd do my college reading along the rivers of America in the peaceful back end of the Hungry Bear restaurant in Critter Country.  It was handy and kind of cool to be an annual passholder.  So Cal passes were still pretty cheap then, and the Fan Blog communities were just kind of coming in to existence. As time went on I found myself collecting books about imagineers, absorbing random trivia.  My interest came full circle when after years of pursuing theatre, I realized how much I had retained from my child hood aspirations of being a sequential artist/animator.  Much of my staging theory is still heavily based on layout principals I had studied on my own in high school reading "how to draw Comics the marvel way" and growing up looking forward to the re-release of Fantasia or as the sole holder of a lifetime pass to the festival of animation... (thats an other story)

So of course upon moving to LA, It only made sense I finally upgrade my pass from the SoCal to the Premium.  I mean, I'm only about 30 minutes away... and 30 minutes is about a minimum drive time anywhere in LA anyways... I justified the cost in that I'm investing in my future career in imagineering... (oh it will happen... just wait...)

Average # of attractions per visit - 7.7

Most Attractions in a single visit - 21 (this particular day was a DL Only Day...)

In this year had two park-hopper days where I hit 19 total...  (Personal best 23 attractions in a single day)

Most CA Adventure attractions in a single day- 11

Most visits in a single month - 6

Fewest visits in a single month - 2

Favorite time to visit - July (tourists leave the park earlier and fewer Annual passholders leaves the last two hours of the night empty! You can basically walk on most attractions!)

46 Visits to Magic Kingdom
23 trips along the Disneyland Railroad (15 of which took me through the Primeval world)
27 trips into the Galaxy Far Far Away (no tallys as to how many times to each planet, I'll work on that fornext year...)
20 excursions into the Temple of the Forbidden Eye
19 Times to my Laughing Place
17 times I found a way out... (7 of which were guided by Sandy Claws)
16 of the wildest rides in the wilderness (despite being closed 60% of the year)
16 treks up and down the Swiss Alps (12 on the Left, 4 on the right)
13 Tales told by dead men
Only 3 Attractions I have not been on all year:
Gadgets Go-Coaster, Dumbo, King Arthurs Carousel, Mainstreet Streetcars

28 visits to CA Adventure
12 Drops into the 5th dimension
12 Screams
9 races (dont know how many I won, thats data for next year)
9 trips under the sea
7 Runs down the Grizzly river
7 soarin over california
Have not experienced anything else at the park more than 5 times

8 attractions I Did not experience all year
King triton's Carousel, Heimlich's Chew Chew Train, Tuck & Roll's Bumper Cars,
(5 of which I Have Never Been on) Disney Jr. Live on Stage, Francis' Ladybug Boogie,  Mater's Junkyard Jamboree, Jumpin Jellyfish, Flik's Flyers (Have Never ridden, however have always wanted a picture in the takeout box)

EVERY Mountain ride (Big thunder, Splash, Materhorn, Space, Radiator Springs, and Grizzly River (Managed to get all the Disneyland Mountains once but not the California Adventure mountains for the complete set.

Posted by Chinese Pirate Prod at 2:00 AM No comments:

There is not More then Meets the Eye... It just is what it is...

So, I saw it.  An act of pure masochistic self torture....  Its impressive how much it can exceed your expectations about how bad its gonna be.  Its impressive how much I could care about  these characters in-spite of the complete dirth of character development, and reductuve nature in which they are written and then I realized its that lack of development that made me care...  I kept wanting the characters to be more than what they were... like helplessly watching a puppy continuously run into an electric fence.

It is so impressively frustrating every time a scene chooses to focus on human characters who are the most uninteresting and pointless characters in the film. Its like going to a football game and being forced to watch spilled beer run down the stairs while the game goes on behind you.

And its too bad, one of the villains is actually a pretty great villain once you ignore the fact that noone understands why hes there... Theres an implication that is supposed to lead to a larger story thread, but it is so vague it fails to make his origins at all intriguing, or the implied breadcrumb mystery alluring...

For us fans and fans of animation voice actor veterans, Peter Cullen has a few great sound bytes... And Frank Welker gets a few brief moments to seethe out a couple good lines... John Goodman and Ken Watanabe are wasted... Characters who are set up to be totally capable and bad ass in one scene are rendered completely idiotic in the next for no reason.  And you know the film is trying to make you worry when they're in trouble cause they say "well... We're in trouble!"

Some of the action sequences are impressive and have some "ooh ahhhs" in between large swaths of just plain confusion... But after a while you just want everyone to stop yelling and talking over one another so you can try to figure out whats going on.  But they're no help, after all, A McGuffin is revealed so late in the film that you dont even have any time to revere or fear it! All of a sudden... its there and suddenly the most important thing.  But its okay its underdeveloped because it softens the blow of the zero payoff it has later on.  It doesnt leave you empty because you're still reeling from the slew of deux ex machinas that basically open up the third act "just 'cause."  Characters make  logic and emotional jumps as if they were tiggers... and the plot switched focus like a Roomba changes direction, slamming in to wall after wall every step of the way...

And yet it manages to somehow sate some deep part of my inner 8-year-old heart, while completely enraging and betraying it all at once.

Sadly, there is not more than meets the eye... it just is what it is...

Posted by Chinese Pirate Prod at 3:57 AM No comments: 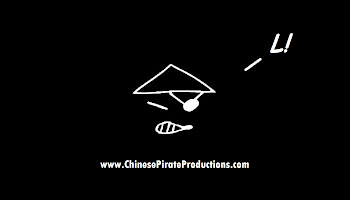